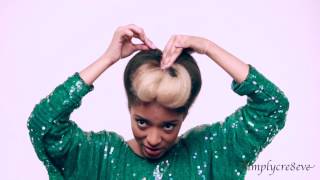 I'll never forget the day one of my cosmetology school classmate volunteered to give me a tape up. At the time, I rocked a multidimensional haircut. 😂 It wasn't a mullet, but it was in the mullet family. Sometimes, it looked like a high top fade, or a faux hawk depending on how I picked it. Now you see why I call it a "multidimensional haircut" 😜 Anyways, one day in class, I was talking to a friend about going to visit my barber when "he" who shall remain nameless approached me and said, "why don't you let me hook you up?" I looked at him with a surprised look

... I paused for a minute before saying "okay". I agreed to this because we had a number of hair/beauty services to complete [to graduate], and that would count towards his. I was doing a good deed... or so I thought. I sat in his chair with no worries as I allowed him do his "thang". His confidence made me confident. While he's doing my line up, I suddenly felt his clippers go into my eyebrow.

I didn't say anything. In my mind he just made a little mistake. I thought "No big deal, nothing an eyebrow pencil can't fix." Then, I felt his clippers go into my brow AGAIN! Now, I have all kinds of crazy thoughts going through my head, buuuut I didn't say anything because I was giving him the benefit of the doubt. "Calm down Rose... Calm down.. Just breathe." He moved to the other side of my head, still confident as ever (I'm a little worried now).

Finally, he finished, brushed the hair off, and gave me the mirror to look at his masterpiece.

What I saw when I looked in the mirror was a girl trying to look like a boy. I mean, he squared my hairline instead of making it round. My forehead looked extra wide. And then I noticed the two slits in my eyebrows. That's when I realized his clippers in my brow was intentional 😩.

I looked like a stud - a pretty stud of course - until my hair grew back. My new look made me more appealing to the "girls that love girls".

So many women tried to holler at me. I was flattered, but turned down every single one and you know why😂. While my hairline grew back quickly, my brows took forever and a day to grow back. Moral of the story is...Idk, I'm still trying to come up with one 😂. Happy Friday beyoutiful people!

*Pictures courtesy of google images. I do not own rights to any of the images used on this post*